6 Types Of Reverb: What They Sound Like And When To Use Them

One of the easiest ways to make your tracks sound (arguably) more “professional” is to apply reverb to them.

But there’s a downside: It can also make your tracks sound extremely muddy and distracting. There is a very fine line with how to use it effectively inside of a mix.

One of the biggest mistakes I see people making with it is choosing the wrong type of reverb.

There are plenty of reverb types out there and it’s important that you understand the differences between all of them so that you find the best fit for your particular song and instruments.

In this article, we’re going to talk about six different types of reverb, how you can use them in your own mixes, and how to differentiate what they each sound like.

The six types of reverb that we’re going to be talking about are:

Let’s talk about the characteristics of each of these…

Room reverb is really simple. It can be defined as a space with walls. That’s really all it is.

The types of room reverb that you can choose from are virtually endless. There are countless options that simulate all sorts of different spaces, shapes, and sizes, ranging from bedrooms, hallways, garages, warehouses, churches, you name it…. Basically, any room that has walls can qualify as room reverb.

It’s very common to see engineers using room reverbs that simulate famous recording studio rooms. This is because those spaces are typically well-tuned and sound really nice and full. They also allow you to make recordings that were made in a small basement or bedroom studio sound like they were created in a much larger facility.

But sometimes pristine quality isn’t always the sound you need. In that case, if you’re looking to add some extra character to your tracks, you might want to pick a room reverb that simulates something smaller and/or unique. For example, rooms such as bedrooms, bathrooms, tiled rooms, and concrete rooms can add a lot of personality to your tracks.

Because every room is so different, all room reverbs are going to sound different. It’s the unique imperfections and reflections of a room that give it its own creative character.

The size of the room can drastically impact the sound you hear.

When using a room reverb that simulates a larger-sized room, you’re going to hear more of the reverb tail and decay. Because of this, you’ll also likely hear a bit more of the character of the room.

On the flip side, if you’re using a small room reverbs with shorter decay times, it can add intimacy to your performances by making your audience feel like they are listening in a small, tight room.

This is why room reverb is so handy… You can virtually place your performers and audience in a very specific location simply by choosing a reverb.

As for which instruments to use room reverb on, it is very commonly used on instruments such as drums, guitar, and vocals.

It’s perfect for when you want to create a big, ambient sound for your drums. Personally, that’s my favorite use for it. 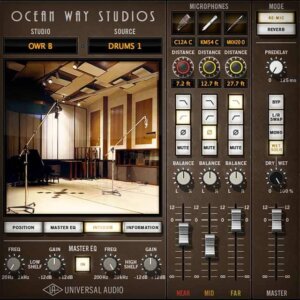 With room reverb, we talked about how it could pretty much be any room that has walls: big or small. But hall reverbs are focused specifically on much larger spaces.  They replicate the sound of very fine-tuned concert halls.

Because of that, they have a very lush quality in their sound.  They are very thick and dense and don’t contain reflections or ringy tones. Instead, the sound is very smooth.

In addition, because concert halls are very spacious, the sound has to travel quite far to get from the stage back of the room. This causes a very long decay time in the reverb’s sound. So when loading hall reverbs inside of your DAW, it is very common to see presets that have long decay times of 2 seconds or more.

Halls are great for thickening up a sound. When you want your vocals or strings to soar, they are a great go-to reverb choice. They can really thicken up a sound and give it lots of depth.

Just be careful with these. If your reverbs have long decay times but the tempo of your song is fast, your mix can become very muddy quickly because the tail of the reverb will start to build up and overlap with your instruments. Ideally, you want to choose reverb times that fit within the tempo of your song so that the tail ends before your next notes.

Chamber reverbs are very similar to room reverbs, but with more character to them.

Back in the day, many studios didn’t have a lot of reverb processors and/or the budget to afford them. So instead, they got scrappy. They would place a speaker inside of a reflective room and they would feed signal from their board into that speaker. They would then record that signal using a microphone placed in the room and feed that back to the console.

They were literally recording the natural ambiance of that room and using that as their reverb.

Typically, chamber reverbs have a very lush, ambient tone. And they’re really great for adding some extra texture to your tracks.

The reason why they have a lot of character to them has to do with the speakers and rooms used to create them. Many of the world’s most famous reverb chambers had very reflective surfaces, odd dimensions, and uneven walls that contributed to their unique sound.

As for which instruments to use chamber reverb on, typically, you’ll hear it used on instruments such as vocals, strings, guitars, and drums. But by no means are these your only option.

With the extra character that chamber reverbs add to your tracks, they are very versatile and can help you create a really cool ambiance with your music. 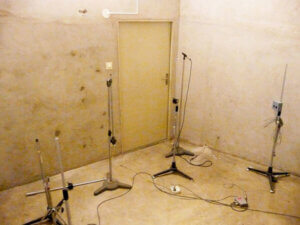 Plate reverb is unlike all of the other ones that we’ve talked about so far. Instead of focusing on recreating an ambient space, plate reverb is a form of artificial ambiance.

Plate reverbs are created by suspending a sheet of metal inside of a frame. On one end of the sheet, you’d have a transducer/speaker that would send a signal through the sheet, and then on the other end, there is a contact microphone that captures the signal.

Depending on the length of the sheet and the type of metal used, you can actually create quite a variety of sounds out of it.

Typically plate reverbs have a dense, warm sound to them.

You’ll commonly hear them use on drums and vocals because this dense sound can add quite a bit of extra sustain and fullness to the instruments.

Now, obviously, we’re in the digital realm, so we’re not actually hooking up these large sheets in our studios, but all of our plugins do a great job of mimicking these physical reverb units that are created to get us this artificial tone. 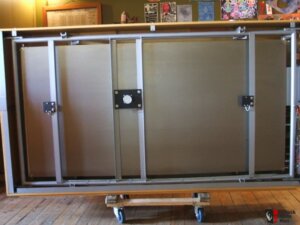 Up next, let’s talk about spring reverb. Spring reverb is another form of artificial ambiance, and it’s very similar to a plate reverb, but instead of using a plate, it uses springs.

It works in a similar fashion where you would have a transducer on one end sending a signal through the metal spring, and then on the other side, you have a contact microphone capturing the sound.

What’s great about spring reverbs is that they can be made really small and portable. Because of this, you’ll commonly find spring reverbs inside of guitar amplifiers since they can easily be fit inside of the structure, without adding a ton of extra weight.

In terms of sound quality, spring reverbs tend to be very bright, reflective, and they have a lot of character to them. The best way that I can describe them is that they have a very “boingy” sound. It’s pretty much what you would expect out of a spring.

In terms of common uses for spring reverb, you’ll very often hear them on guitars and on vocals. When you think of surf rock, it’s the sound of spring reverb that gives it its unique character. 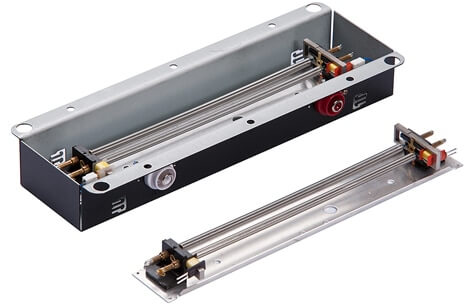 Last but not least, let’s talk about nonlinear reverbs.

When listening to the rest of the reverb types we’ve covered, you will hear a gradual, natural decline in the volume of the reverb tail; but with nonlinear reverbs, they have a very unnatural ambience to them. Their reverb tail doesn’t decay like most natural sounds.

The most common type of non-linear reverb that you’ll hear is known as a gated reverb. It is simply a normal reverb that is followed by a gate. Once the signal passes below a certain threshold, the gate kicks in and basically silences the rest of the tail. So it has this very short, rapid decay, but with a very intense dense sound at the beginning of it.

This is a great option for adding sustain to your instruments, especially with drums.

When it comes to drums, typically, the close mic sound is often pretty short. But when you add a little bit of nonlinear reverb to it, you can really stretch out the sound of the drum and add some cool sustain to it.

If you ever want to remember what a non-linear reverb sounds like, think about songs like “In The Air Tonight” by Phil Collins or pretty much any song from the ’80s with electronic drums. The non-linear reverb was a defining sound of the 80’s drum tone.

When used loudly in a mix, it can sound very intense and robotic; but when tucked in slightly, it does a great job of beefing up your tracks. Just don’t get too carried away with it.

So there you have it… the six main types of reverb.

I hope that by now, you have a better sense of what the different types of reverbs sound like and where you might want to use them.

By treating the different reverb types as unique tools on their own, you can add a lot of character to your songs and create a sense of atmosphere and space with your tracks.

Looking to create more polish inside of your mixes?

Download The Ultimate Mixing Blueprint: A free guide on how to use EQ and compression across a variety of instruments so that you can create great mixes quickly.